TAKING ONE FOR THE TEAM

Howard Brookins Jr, the alderman for Chicago’s 21st ward, was biking along Cal-Sag Trail on Nov. 13, when a squirrel darted into his path. The squirrel wrapped itself in the spokes of the alderman’s bicycle. [The Washington Post.]  According to the alderman, “I can think of no other reason for this squirrel’s actions than that it was like a suicide bomber, getting revenge.” [The Chicago Tribune.]

If this is revenge, there is good reason for it. Yes sir!  As the Post also reports: “Brookins denounced the eastern gray squirrel in a Chicago City Council meeting and has publicly spoken out about a toothy menace.” He complains of “aggressive squirrels that undermine efforts to overhaul the city’s trash carts.” [Chicago Sun Times]  He claims that squirrels are gnawing through garbage cart lids at a cost to the city of $300,000!

According our own Alexander Harbinger PhD, such behavior is perfectly normal. “Like all rodents, the teeth continue to grow during an entire lifetime. It is gnaw or die.”

As proof of the squirrel’s malicious intent, Alderman Brookings posted a photograph of the unfortunate animal on Facebook, caught in the wheel of his bicycle. 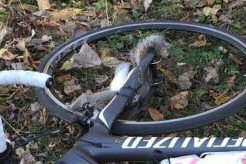 Brookins did not escape injury from the ferocious creature’s attack. “The alderman flipped over the handlebars, fractured his skull, broke his nose, and knocked out a handful of teeth.” [Tribune]

The remedy proposed is extermination of all urban squirrels.

Revenge of the Squirrels

Of course, when faced with annihilation, any red-blooded squirrel is compelled to take action! Who can find it in his heart to condemn this animal?  But for the protection of the residents of our fair city, we must guard against further malevolent behavior perpetrated by these scheming creatures.

So far, this activity appears unique to the gray squirrels in Brookins’ 21st Ward.  The implications are startling and frightening.  These particular animals exhibit traits that must not be permitted to spread.

Jim Kren, our assistant editor, offered this opinion: “Squirrels are good-for-nothing vermin. They look out for their kind and know who is persecuting them.  If you thwart their plans, they figure a way to take care of the problem.  Nothing can stop them from getting what they want!”

But renowned squirrel expert, B. A. Christie MLS, holds a different view. “Squirrels are attractive, with fine coats and tails—a benefit to any neighborhood. They are strong, brave, loyal, intelligent, entertaining, and acrobatic.  Squirrels prune and plant trees.  And tough?  I saw one fall fifty feet to the pavement—but after a few minutes, the little dear just hopped to its feet and ran off.  Every levelheaded individual knows that squirrels are friendly. I believe Bill Murray said so in a motion picture.”

No, I am not entirely satisfied with the alderman’s flippant slur against these creatures. Nor do I entirely agree with the other opinions damning them.  No sir!  Permit me to propose a few alternative theories on the matter:

Greedy Guts the squirrel, outside my window

Does it not seem a whole lot more believable to you that this squirrel lodged in the spokes of the good alderman’s bicycle during his highly successful attempt to run it down? A fat squirrel lounging on a path can present a tempting target to certain personality types, and such behavior may seem quite natural to a politician, particularly an alderman.  Has Brookins intentionally misrepresented the facts and blamed the true victim for the consequenses of his personal indulgence in an urban blood sport?

One strong indication of the veracity of this theory is seen in the alderman’s photograph.  The squirrel is lodged in the front wheel, which indicates an attack by the alderman, not the squirrel.  If, on the other hand, the animal lodged in the rear wheel, the alderman’s story might carry some weight.  Take dogs as an example.  Dogs are known to snap at automobile tires and invariably go for the rear wheel.  It’s a question of catching the vehicle as it speeds by.  Perhaps the ASPCA should investigate the matter.  The evidence is clearly on display in the photograph published by the man himself!

Squirrels will eat just about anything, and have been known to forage during daylight hours, when they find trash conveniently strewn about—but they do not do so at night! They sleep at night.  Does the timid squirrel gnaw through a garbage can in broad daylight, vulnerably exposing its hide to every kind of predator for an extended period of time?  No sir!  The thought seems akin to a neighborhood bunny rabbit attacking a Pit Bull in the act of sullying somebody’s front lawn!

Nighttime is the rat’s domain, not the squirrel’s.  Nighttime is the likely period for damage to ensue.  Could it be that, during the daylight hours, the alderman observed some squirrels in the civic-minded act of cleaning up the nocturnal mess left by sloppy rats?  This is guilt by association of the worst kind!  Both are rodents, but the similarity ends there!  I propose that we are dealing with an unsuccessful rat control problem.  That is where the battle must be fought.

Permit me to relate a perplexing personal incident. After one fine Christmas afternoon dinner, I noted a scurry of cold and hungry squirrels—sweet, harmless, and industrious animals that every normal person loves.  My wife calls the big one Greedy Guts—an admirable fellow, in my opinion.  I slid open the window and tossed out a handful of peanuts to the little beggar.  Little did I know that my benevolence would provoke a strong reaction from my houseguest.

Jim Kren, our guest, turned violently red and spoke in loud and vitriolic indignation, “You feed those rats?” This man hails from an affluent tree-lined neighborhood teeming with a large and healthy squirrel population.  Imagine his constant horror, living in such exquisite surroundings and unable to distinguish a squirrel from other rodentia.  Unbearable!  It explains that nervous tick.

For those that share Kren’s malady, permit me to quell such unwarranted and hysterical fears:

As noted, Brooking’s 21st ward appears to be the only area of Chicago suffering squirrel damage.  No other alderman or city councilman has taken up the cause.  That raises some questions.  I own a home in the country.  Its peaceful environs swarm with squirrels, rabbits, hawks, turkey vultures, and deer.  Yet our garbage bin remains intact.  How can this be?  Are the alderman’s cans of less quality than others?  Impossible!  Those receptacles reportedly cost the city hundreds of thousands of tax dollars!  Is it possible that squirrels are a scapegoat for some sort of political shenanigans?   I put it to you, sir!  Chicagoans have learned to accept business-as-usual in our longstanding tradition of machine politics as long as one keeps quiet about it.  There is no call to harm the wildlife. 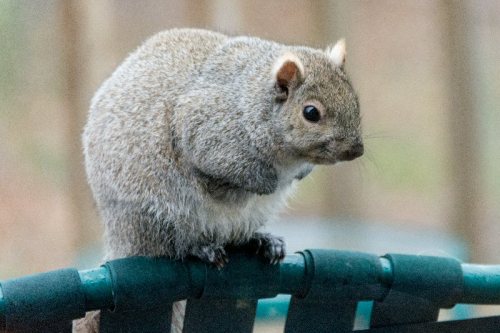 A squirrel is not a rat

But what if Alderman Brookins’ allegations were true?  Could it be that we are witnessing an altruistic and noble example of squireldom? Yes sir! Such an image of heroic sacrifice warms my heart. Faced with the the personal hatred and vendetta of one malevolent alderman—faced with the annihilation of family and friends—faced with the end of a way-of-life-as-he-knows-it—one of Chicago’s bravest takes matters into his own paws.  He takes one for the team!

Mr. Wayne’s speculations are his own and do not always represent the opinions of this journal.

Chicago Venture Magazine is a publication of Nathaniel Press www.ChicagoVentureMagazine.com Comments and re-posts in full or in part are welcomed and encouraged if accompanied by attribution and a web link. This is not investment advice. We do not guarantee accuracy. It’s not our fault if you lose money.

Comments Off on TAKING ONE FOR THE TEAM